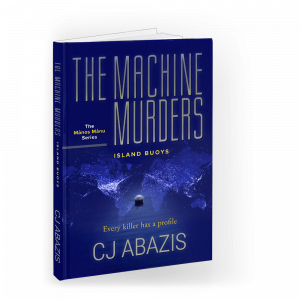 In The Machine Murders, Data Scientists become the Sherlock Holmes of the AI age

You know, Officer, …We have very different ideas about people. You think they are created by something very, very big. I believe they are made up of pieces that are very, very small.”
— CJ Abazis

NEW YORK, NEW YORK, USA, July 28, 2021 /EINPresswire.com/ — In CJ Abazis’ new audiobook The Machine Murders: Island Buoys narrated by David Foley (Amazon/Audible, Publisto Ltd, 2021), Manos Manu goes to Mykonos island in Greece to attend the wedding of a friend. Here he witnesses the hunt for a serial killer who abducts and kills his victims, passes a chain through their bodies and drops them at sea as buoys with the word “FREE” written over.

The atmosphere of this techno thriller is perfectly depicted by the award-winning David Foley who offers a compelling performance which combines humor, agony and drama in a breathtaking rhythm, in sync to the book’s page-turning pace.

The unique character of Manu is artfully reflected through the talented narration and voice-over of the well known actor and so are those of his partners in crime solving, the mysterious Lena Sideris and the enigmatic Mei Ni.

We are briskly transported to the rocking party Island of Mykonos where we hear the local police with heavy greek accents negotiate whether or not they will adopt Interpol’s (aka Manos’ and Ni’s) innovative methods or rather stick to their old-fashioned methods while the killer roams the island and unobstructed continues his rampage.

“You know, Officer,” said Manos. “We have very different ideas about people. You think they are created by something very, very big. I believe they are made up of pieces that are very, very small.”

Audiobook "The Machine Murders: Island Buoys" by CJ Abazis is available exclusively on Amazon, iTunes and Audible.com. Priced at $21.65, it is 8 hours and 4 minutes in length. Like the Machine Murders page on Facebook and enlist for a free promo code to download the audiobook and get the chance to listen to David Foley’s outstanding narration for free.

About David Foley
David Foley is a New York based actor, singer and performer. He was the chief repetiteur at the 25th Anniversary production of “The Phantom of the Opera”; he played at NewSical the Musical; he was the protagonist as Jean Valjean at the Little Theatre on the Square production of “Les Miserables” by Victor Hugo; he covered the title ogre in the 1st National touring company of Shrek The Musical. Other New York credits include Forbidden Broadway and Evergreen with Prospect Theater Company. David received a Kevin Kline Award nomination for his portrayal of Nathan Detroit in “Guys and Dolls”, and played Marlin in “Finding Nemo: The Musical” at Walt Disney World. A frequent performer of new works, David has helped develop musicals with the BMI and ASCAP workshops and with the Radio City Rockettes. He is a graduate of Boston University's School of Fine Arts, a member of Actors' Equity Association and, most of all, a husband and father to Kerry and D3.

About Publisto Ltd
For the past 12 years, Publisto has published online platforms, educational apps and games producing high quality online work, from children’s storybooks to enterprise platforms and machine learning systems. The Machine Murders series is its first foray in the commercial thriller market.