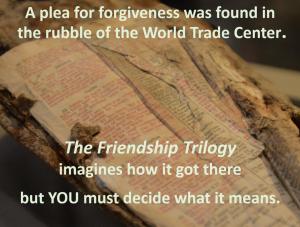 Workshop to discuss meaning of forgiveness. 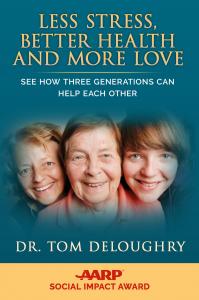 Book to be used in Forgiveness Workshops 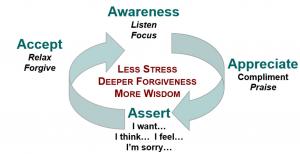 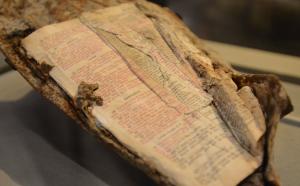 You can stop a self-defeating cycle by using one or more of the Satisfaction Skills – awareness, appreciation, assertiveness, or acceptance – taught in the workshop, the workbook, and the novels.”
— Dr. Tom DeLoughry, Ed.D.

BUFFALO, NEW YORK, USA, August 19, 2021 /EINPresswire.com/ — An online workshop, Forgiving Yourself, Others and God, will be offered on Saturday, September 11th and the 18th from 10 to 11:30 PM, sponsored by the Unity Church of Buffalo. It will discuss the meaning of a plea for forgiveness that was found fused to molten metal in the rubble of the Twin Towers: a Bible open to Christ’s message to “turn the other cheek.” The workshop is based on Less Stress, Better Health and More Love, a program authored by the workshop leader, Dr. Tom DeLoughry, that was honored with AARP’s Social Impact Award as, “a simple mind body-Spirit program for seniors, adults and teens of any faith, or no faith.” The workbook and workshop are available without charge to anyone who preregisters at www.FriendshipTrilogy.com. A free-will offering may be made to Unity of Buffalo, an inclusive spiritual community that offers a positive, practical, progressive approach to Christianity and honors the universal truths in all religions.

“Of course, we need to protect ourselves when we’re threatened,” says Dr. DeLoughry, a former Assistant Professor of Public Health and Family Medicine at the University of Buffalo. “But, negative emotions, like anger and fear, create a filter that keeps our awareness focused on possible threats while overlooking positive solutions for personal and political problems. Simply put, if you’re in a bad mood you will mostly see what’s bad, then make a bad decision that creates more problems. But you can stop this self-defeating cycle by using one or more of the Satisfaction Skills (awareness, appreciation, assertiveness or acceptance) that we teach in the workshops, the workbooks, and the novels of our Living Well program.”

DeLoughry’s program builds on earlier research by Dr. Jonathan Haidt, author of The Righteous Mind: Why Good People Are Divided by Politics and Religion, who states that feelings and attitudes cause people to immediately perceive just the facts that support their emotions and values while ignoring other evidence. "The Satisfaction Skills," DeLoughry says, "can reduce the fear, anger, or depression that prompt people to judge unfairly. These same four skills also improve communication, reduces stress, and enhances forgiveness to allow more of our innate wisdom to shine.”

DeLoughry is the author of The Friendship Trilogy, a fictional series about four musicians who meet in the Sixties, are stunned by terrorism, and then struggle with the opioid, COVID, and fear epidemics. The importance of judging less and forgiving more is summarized in the subtitles of two of the Trilogy’s novels: “Too little religion may be harmful, but can too much kill?” and “Which epidemic is most harmful: the opioids, COVID or the fear?” The Trilogy tells how Donna brought a Bible to the Twin Towers after she was expelled from her ministry and threatened by Malik, an American al-Qaeda member who sought to avenge the honor of his sister, Alia after a sex scandal erupted in the news. This allows the story to be told from both the terrorist and victims’ perspectives.

The Trilogy is also a reflection on how music and mindfulness can help to stop fear and find love in personal lives and in politics. Tom had the pleasure of playing music with his wife for nearly forty years, and with his daughter for thirty years, in a group similar to that depicted in the novels. He often incorporates music into his stress management and forgiveness workshops.

ABOUT DR. DELOUGHRY
Dr. Tom DeLoughry has directed drug abuse and adolescent services in Child Psychiatry at Buffalo Children’s Hospital; Wellness and Disease Management for Independent Health, a large managed care organization; and also directed the Franciscan retreat center at Stella Niagara. He served as an adjunct Assistant Professor of Public Health and a research Assistant Professor of Family Medicine at the University of Buffalo where he earned a doctorate in health education and behavior. He is the author of many books including the American Lung Association’s national program for emphysema and chronic bronchitis, Help Yourself to Better Breathing; Caregiver Stories; Less Stress, Better Health, and More Love; and The Friendship Trilogy, as well as Spirituality and Eldercare, published in Spiritual Dimension of Patient Care, a Templeton Press textbook. He is a Christian whose spirituality has been enhanced by Buddhism and other Eastern faiths.