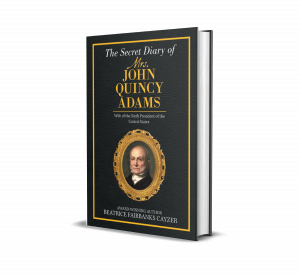 Another look at events in history

COOKSTOWN, NEW JERSEY, USA, August 20, 2021 /EINPresswire.com/ — People often take it as a sign of maturity to be able to see things from multiple perspectives. There is often more than one side to every story, and each one has its own version of how events turned out and how it made them feel. Sometimes these accounts are taken for granted and are doomed to never see the light of day, existing only as a memory. But sometimes, these accounts are written down, surviving longer than those whose stories line their pages. In "The Secret Diary of Mrs. Quincy Adams," we get to see what life was like being married to the sixth president of the United States of America.

Beatrice Fairbanks Cayzer’s perspectives in life only grew broader through the years. In line with her family’s history of establishing communities and fostering growth in Upper Virginia back in the 1620s, she founded the Cayzer Museum for Children in England. Her writing was inspired by the many places she’s spent time in throughout her life. While in Oxfordshire, she wrote "The Princes and Princesses of Wales," while in Guernsey, she wrote "The Royal World of Animals." When she returned to the USA, she wrote several successful novels, including the Rick Harrow series, which won the Book of the Year award from the Horseracing Writer’s Association. Beatrice is married to Stanley Cayzer.

"The Secret Diary of Mrs. John Quincy Adams" was a finalist in the 2016 Chanticleer Book Awards for Historical Fiction. It features the ups and downs of the relationship between then-president John Quincy Adams when he married Louisa Johnson after two years of courtship. John Quincy Adams originally tried to get out of marrying her due to some of the things in her past. The 50 years of married life went through a lot of ups and downs, as their earlier days were also plagued by the horrors of slavery which they both worked towards abolishing. This challenge brought them closer together and the details of their bliss were outlined by Louisa’s own words through her secret diary.

See how love can change your view by picking up a copy of "The Secret Diary of Mrs. John Quincy Adams" today!

You can visit the author's website at www.beatricecayzer.com to know more about her and her book.