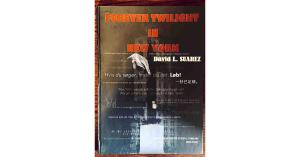 NEW YORK, NEW YORK, USA, August 24, 2021 /EINPresswire.com/ — The events of September 11 are seemingly buried deep under layers of subsequent history and interpretation, so that it could become hard to sort out the true feelings of that day. Author and film executive, David L. Suarez presents the reader with a faceless character who explores New York with photography.

Capturing the Resilient Spirit of New York
Written in multiple languages and featuring hundreds of photos of New York, Suarez presents the City of New York with universal, dramatic and profound poetry from unique angles. The book aims to have the reader ponder about existence, reality, good and bad, love and hate, and many other dynamics which surround us on a daily basis. Having spent countless hours perfecting Forever Twilight In New York, Suarez proudly announced that it has been finalised. Interested parties can pre-order the book online.

“Have you ever taken a picture with your cell phone or camera and said to yourself, ‘Gosh, this picture is nothing compared to what’s in front of my eyes!’ Well, I felt that way each time I took a picture in New York City.” Suarez revealed. The luxury photo book features 230+ pages of photography which aims to capture the energy of each locale.

Suarez pledged a portion of proceeds to help families of the victims of 9/11. He states: “I think we should all give. It’s good for the mind, it’s good for the soul, and most importantly, it is good for the people. Being able to see things from multiple points of view is a blessing. Understanding others is humanity. You are not special. I am just a guy, another guy among more than 6 billion people reading this at this exact moment. We are all perfectly and beautifully interconnected.”

Keep on Moving
“New York is the kind of city that will amaze you every time you are there. Its buildings, people, lights, days, and nights are all profoundly unique—there is no need to go to another planet to feel like you are in another world.” – David L. Suarez. Discussing topics of love, hate, peace and war the author takes a look at some hard-hitting truths. “Loving someone deeply is very difficult, but once you do, it’s so intense and powerful that it will totally change you and completely modify who you are,” Suarez explains. In Forever Twilight In New York the reader is presented with a nameless, faceless character who explores the concept of love, hate, peace and war through photography and prose.

On exploring the concept of hate the author turns to the September 11 attacks. Suarez clarifies: “My book touches on and discusses multiple feelings we encounter and transforms us by possessing our behaviors and actions. Hate can be devastating and profoundly damaging. 9/11 was an act of hate at the highest level that we will never forget.”

David L. Suarez: Author and Film Executive
Suarez has more than 15 years of experience in entertainment finance, acquisitions and distribution as well as executive film producing. Having worked on co-productions which required the development of financing strategies to raise capital, Suarez has been managing and dealing with teams in various fields.

The Transformative Power of Books
Having spent years perfecting the final product, David L. Suarez notes that: “Writing each page in this book was a totally spiritual experience. It would help if you tried it one day: sit down in front of a white empty piece of paper and start writing a book. After you have written a few words, you will feel different. You will have done something that will stay there, for eternity.”