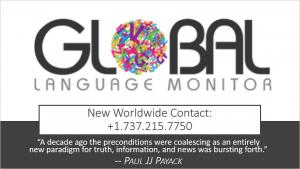 Today political opponents are routinely compared to the most vile historical figures. Apparently with a nearly invisible, morphing enemy, we have turned our attacks upon ourselves & our institutions.”
— Paul JJ Payack, President and Chief Word Analyst

(Updated) The Global Language Monitor today released an updated analysis of how the 9/11 terrorist attacks on the World Trade Center, The Pentagon, and the pending targets in Washington, D.C., widely suspected to be the White House or the Capitol Building, have changed the way Americans speak in terms of vernacular, word choice and tone.

Updating an earlier analysis completed on the Fifth Anniversary of the attacks, it is a continued and historic change in an 'unCivil War‘ in terms of the vitriolic exchange currently witnessed on the American Political scene.  According to Paul JJ Payack, President and Chief Word Analyst of GLM (www.LanguageMonitor.com), these are a few of the ways where the events of 9/11 have impacted the way Americans speak.

1. 9/11 — The first case is the use of 9/11, itself, as a shorthand for the 2001 terrorist attacks. Using various web metrics, 9/11 outpaces any other name, including the spelled out 'September 11th" by 7:1 margin. This designation in itself it quite interesting. It is true that Franklin D. Roosevelt proclaimed the Pearl Harbor attack as "December 7th, 1941 as a day which will live in infamy". But there were no "12/7" rallying cries thereafter. Neither were the dates immortalized of the original battles of the Korean War, the Gulf of Tonkin Incident which preceded the major escalation of the Vietnam War, The First Gulf War, The Afganistan siege, or even the recent Iraqi Invasion. Only the 7/7 attacks on the London Subway system are recorded in common memory by their date (and primarily in the UK in general,  and London in particular).

2. Ground Zero — The name Ground Zero evokes a sacred place, where the World Trade Center's Twin Towers once stood. It is also revered as a burial ground since thousands of bodies literally vaporized in the ensuing collapse with no remains found whatsoever. Almost universally, it is capitalized as any other proper name, with a few exceptions, most notably the New York Times. Even recently, The Times insisted on referring to Ground Zero in the lower case, calling it ‘the area known as ground zero' (Sic).  Names are officially bestowed in a number of ways, most often by bureaucratic committees following arcane sets of rules, answering to few. In this case, we kindly request those bureaucrats to follow the lead of hundreds of millions around the world who have formally bestowed upon that special place, the formal name of Ground Zero.

3. Hero — In mythology, heroes were men and women often of divine ancestry endowed with the gifts of courage and strength. In reality, everyday heroes of the late 20th and early 21st centuries were sports figures ('Be like Mike' and 'Where have you gone, Joe DiMaggio'), comic book and cartoon characters ala Superman and Spiderman, and all too frequently 'anti-heroes' known for the colossal damage they might inflict upon a helpless (and often hapless) world. Into this tableaux, came the heroes of 9/11, very real men and women, rushing into and up the Towers as everyone else was rushing down and out; rushing the cockpit of Flight 93, with knives and forks and steaming hot coffee, forcing the startled highjackers to abandon their plans of crashing into the Capitol or White House rather than the previously unheralded soil of Shanksville, PA; and the men and women who quietly stood their posts at the Pentagon, just doing their duty, not knowing if they would be subjected to another horrific, and more deadly, attack at any moment. In the post-9/11 world, the term has now come to apply to any who place their lives in danger to foster the public good, especially 'first-responders' such as: firefighters, EMTs, and police, who quietly place their lives on the line every day.

4. -stan — The suffix in Persian and related languages that means, literally, 'land of,' hence, Afghanistan or Land of the Afghans, or Kurdistan (or Kurdish Territories), or even this relatively new moniker: Londonistan.  Talibanistan, referring to Afganistan and the 'tribal lands' in Pakistan in the New York Times Sunday Magazine is the latest instantiation.

5. The unCivil War — Since 9/11 after a very short reprieve, the political discourse of American politics has, arguably, descended to its lowest level since the Civil-War era when Lincoln was typically depicted as a know-nothing, Bible-spouting Baboon. Even speech of the Watergate era was spared the hyperbole commonly heard today, as respect for the institution of the presidency remained high.

Today, political opponents are routinely called 'liars,' are typically compared to Hitler, Nazis and Fascists; are accused of purposely allowing New Orleans' inundation in order to destroy disenfranchised elements of our population, and so on. It is very difficult to pinpoint the exact cause of this reaction. It has been suggested that in the face of a nearly invisible, constantly morphing, enemy, we have turned the attack inward, upon ourselves, and our institutions.

Number of Words in the English Language (The BBc)