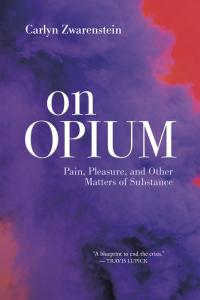 On Opium by Toronto journalist Carlyn Zwarenstein expands on her longtime coverage and brings new, needed voices to the dialog surrounding the opioid epidemic.

A beautifully written meditation on opioids, addiction, joy, and pain — and the cruel and rigid policies we devise that mainly serve to make suffering worse.”
— Maia Szalavitz, author of Undoing Drugs

North Americans are the world’s most prolific users of opioid painkillers. In On Opium, Zwarenstein describes her own use of opioid-inspired medicines to cope with a painful disease. Evoking both Thomas De Quincey and Frida Kahlo, she travels from the decadence of recreational drug use in past eras to the misery and privation of the overdose crisis today.

Speaking with users of prescribed morphine, illicit fentanyl, and smoked opium, Zwarenstein investigates uncomfortable questions about why people use substances and when substance use becomes addiction. And she exposes causes of drug-related harms: the debilitating effects of poverty, isolation, and trauma; the role of race, class, and gender in addressing pain; and a system of prohibition that has converted age-old medicines into taboo substances.

Through all of this, Zwarenstein finds hope. Drawing on solidarity between illicit drug users and people in pain; in a wise understanding of what humans need to be well; and in radical drug policies like legalization and safe supply, she lays out a vision of a world where suffering is no longer lauded, and opioids are no longer demonized.

Praise for On Opium:
“Carlyn Zwarenstein provides a voice previously missing from the overdose crisis. With empathy and urgency, she takes us inside the world of people who use opioids at a time when they are dying in record numbers.” — Travis Lupick, author of Fighting for Space

“A beautifully written meditation on opioids, addiction, joy and pain — and the cruel and rigid policies we devise that mainly serve to make suffering worse." — Maia Szalavitz, author of Undoing Drugs

Author bio:
CARLYN ZWARENSTEIN is a writer based in Toronto. Her writing has appeared in the Guardian, the Toronto Star, and Vice. She is also the author of Opium Eater: The New Confessions.