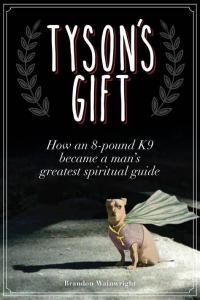 PLEASANTON, CALIFORNIA, UNITED STATES, September 13, 2021 /EINPresswire.com/ — Tyson’s Gift, the story of a man’s relationship with his furry best friend and soul mate, is now available on Amazon. The memoir of love, published by Glass Spider Publishing, follows the little Dachshund-Chihuahua mix as he tests his new dad’s loyalty and genuineness before burrowing into his heart forever. With a strong message of the power of eternal devotion, Tyson’s Gift is an affirmation of the connection between a person and their dog and exemplifies the notion that nothing can break that bond.

“It means the world to me that in bringing Tyson’s story to others, he’s able to provide some comfort to pet-parents who are grieving,” says author Brandon Wainwright. “It’s my way of honoring Tyson by reaching those who are going through the pain of losing a beloved pet and offering them an avenue in which they can cope.”

Initially a no-nonsense skeptic, police officer Brandon Wainwright bristled at the thought of allowing a teeny dog into his home and wanted a big dog like a Labrador or a German shepherd. However, as Brandon and the pup, Tyson, danced around getting comfortable with one another, a mutual respect and love formed that became unbreakable.

Throughout the family’s journey with Tyson, the dog’s quirks and strong personality is revealed, leaving any pet-parent who reads the story smiling along with recognition at the dog’s antics. It is when Tyson becomes ill and passes away that Brandon is faced with questioning his faith as he longs to connect with his pup who is on the other side. Thus begins his life-changing spiritual awakening as Tyson begins to communicate with him in the most endearing ways.

As Brandon begins to consult with spiritual intuitives and pet communicators in an effort to uncover the truth about the afterlife, he embarks upon an incredible journey that shakes his perception of reality and challenges his beliefs about what happens to us after we die. In presenting this story to others, Brandon shares healing to those who are in search of answers and affirms the eternal love between a person and their fur-baby. This is a gift from Tyson.

Learn more about Brandon and Tyson by visiting www.TysonsGift.com. Tyson’s Gift is available on Amazon.