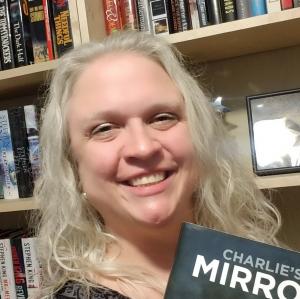 COON RAPIDS, MINNESOTA, UNITED STATES, September 14, 2021 /EINPresswire.com/ — Coon Rapids, Minnesota resident Jennifer DeVries, an independent author writing under the pseudonym Brenda Lyne, released her second novel, SISTER LOST, today. SISTER LOST was inspired by the true story of Latanisha Carmichael, a New York City toddler who was killed by her own mother in 1979 and her body hidden in a closet for twenty years. The story captivated the author, leaving her to wonder what it would be like to live in that house — and to be the twin brother the little girl left behind.

SISTER LOST explores those questions from the viewpoint of Minneapolis single mother Lexie Novak, the house’s newest owner. As soon as she and her four-year-old daughter Ava move in, the nightmares, the headaches, and the strange electrical sensations begin. Ava, normally a bright and happy girl, throws violent tantrums — and Lexie catches herself thinking of ways to kill the little shit. With the help of neighbor Ryan Laughlin, Lexie must uncover the secrets of the house on Washburn Avenue – and reunite a dying man with his long-lost twin sister – before it’s too late.

“Every book is a labor of love, but I’m especially proud of SISTER LOST,” Jennifer says. “It’s my second novel, but it’s the first one I’ve published independently. My debut novel, CHARLIE’S MIRROR, was published last year by City Limits Publishing, a now-defunct Nashville-based publisher that didn’t give it the attention it deserved, mistreated its staff and authors, and then closed its doors without paying any wages or royalties. After that awful experience I decided to strike out on my own and bring my second book to market properly, the way my first book should have been. I’m thrilled to bring SISTER LOST to readers who appreciate a contemporary paranormal tale that is grounded in real life – and will keep them on the edge of their seat all the way through."

Reviewers love SISTER LOST too. “The contrasting elements of fear and courage, rejection and acceptance, evil and love, create an unforgettable and gripping tale that will chill and thrill everyone who loves blood-curdling horror stories with a supernatural twist and a touch of romance,” says Susan Sewell, a reviewer with Readers’ Favorite. And Sacha T.Y. Fortuné had this to say: “I really enjoyed this novel and would highly recommend it to mature readers who can appreciate darkness — both of horror, and of emotional depth.” Both reviewers, plus two others, gave SISTER LOST five stars.

Jennifer is an affiliate member of Mystery Writers of America, a member of the Twin Cities chapter of Sisters in Crime, and she’s attended creative writing classes and writers' workshops at institutions including the Minnesota Writer's Workshop, The Loft Literary Center, the University of Minnesota, the University of Wisconsin-Madison, and North Hennepin Community College—from which she earned a Certificate in Creative Writing in 2005.

SISTER LOST by Brenda Lyne is available in paperback and e-book through online retailers including Amazon and Barnes & Noble. See all ordering options and learn more about Brenda Lyne by visiting her website at brendalyne.com.