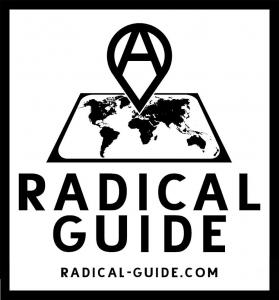 The deadline to support this initiative is November 19th, 2021.

SAN FRANCISCO, CALIFORNIA, UNITED STATES, September 23, 2021 /EINPresswire.com/ — A Radical Guide is pleased to announce the official launch of its crowdfunding campaign on IndieGogo.

A Radical Guide is a site that connects movement leaders and activists from around the world. The organization’s purpose is to lift up and raise awareness of people and movements who are building a world that works for all – one that centers its success around mutual aid, cooperation, and community. To achieve this purpose, A Radical Guide provides a comprehensive directory of historical and current locations, people, and places of interest highlighting the diverse world of resistance.

In the organization’s most recent news, A Radical Guide is promoting its current IndieGogo campaign designed to expand its reach and raise awareness of the diverse world of resistance. Donations to the campaign will enable A Radical Guide to seek out, and partner with, groups and individuals to document their work and share their stories through video. Additionally, it will support work with groups who produce live events, such as anarchist book fairs, panel discussions, and more, to help record their events and broadcast them live to an audience who cannot attend in person.

“Oftentimes, movements and people who work to challenge the current worldview are suppressed, isolated, and removed from public knowledge – especially during the ongoing global pandemic,” says founder of A Radical Guide, Jason Bayless. “Our goal is to focus on people who are creating a better world for all – a world that is not rooted in capitalism, competition, white supremacy, patriarchy, and hierarchy, but rather in mutual aid, cooperation, and community. This crowdfunding campaign will provide the necessary updates so we can extend our efforts and shine the light on work that is often hidden from the mainstream.”

In addition to the existing IndieGogo campaign, readers will also have the opportunity to fund an eco-anarchist collective based in Davao, Philippines.

The deadline to support this initiative is November 19th, 2021, with perk items including stickers, tote bags, journals, beanies, coffee mugs, clothing, and packages.

For more information about A Radical Guide, or to make a donation, please visit https://www.indiegogo.com/projects/a-radical-project-stories-of-the-underground#/.

About A Radical Guide

A Radical Guide was founded by Jason Bayless to offer more than 1000 locations, in over 68 countries, where people are working together globally to create a better world. Through the site, community members can easily seek out one another, be in conversation to learn from each other, and collectively contribute to creating the world we all deserve.

In addition to providing a platform for like-minded folks to find each other, A Radical Guide offers online courses that deepen collective knowledge of movements, systems of oppression (capitalism, white supremacy, patriarchy, hierarchy) and improve collective skills. A Radical Guide also takes active role in connecting directly with activists and groups on the ground and provides funding, tech, and project support.

Jason Bayless is a diverse activist with a wide range of experience. He has traveled the country documenting and reporting animal abuse and neglect within the entertainment industry, including Ringling Bros. and Barnum & Bailey Circus, and the NYC horse drawn carriage industry.

He serves as President of the Board of Directors with Center for Farmworker Families, non-profit organization dedicated to education, advocacy, and support for farmworker families.

Jason is also on the National Board of Directors of Move to Amend, a coalition of organizations and individuals, who are working together to end corporate personhood and works to remove money as protected free speech under the First Amendment.

He served on the board for the Chiapas Support Committee, a grassroots collective that serves as a center for education and information about Chiapas, the Zapatista communities and Mexico.

Jason is on the Senior Advisory Committee for Institute for Critical Animal Studies (ICAS). ICAS mission is rooted in animal liberation and anarchism, is an international intersectional transformative holistic theory-to-action activist led based scholarly think-tank to unapologetically examine, explain, be in solidarity with, and be part of radical and revolutionary actions, theories, groups, and movements for total liberation and to dismantle all systems of domination and oppression, in hopes for a just, equitable, inclusive, and peaceful world.