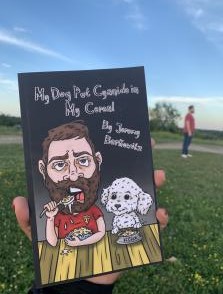 A fan holds up a copy of the book. 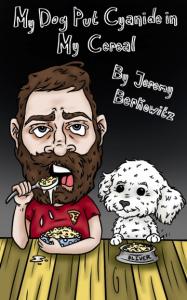 DETROIT, MICHIGAN, UNITED STATES, September 23, 2021 /EINPresswire.com/ — Jeremy Berkowitz announced today the release of his collection of 35 short stories called My Dog Put Cyanide in My Cereal. This milestone is a major move for Jeremy Berkowitz in his mission to promote awareness for mental health, specifically bipolar disorder, in new and unique ways.

“People love their pets more than anything. I wanted to tell stories using dogs that gave people a new perspective on both their own mental health and the struggle that many around them face,” says Jeremy Berkowitz.

Among Berkowitz’s 35 short stories, there is a three-part series called “The Incision” where characters surgically remove their mental illness and give the hardship to their pets. Each episode follows the toll it takes on both the owner and the pet in unique ways.

One reader who Berkowitz would like to leave anonymous e-mailed him after listening to “The Incision Pt. 2” and said, “It’s so cliche but I felt so I understood. I also felt less disappointment and frustration with myself.”

My Dog Put Cyanide in My Cereal is available as a book on Amazon or available to listen to as a literary podcast for free on Spotify, Apple Podcasts, or almost anywhere you can listen to podcasts.

“Being bipolar is tough. I’m lucky to have such a great support system,” said Berkowitz. “This book is my love letter to anyone struggling with their mental health. I just hope it can make someone feel a little less alone."

To learn more about My Dog Put Cyanide in My Cereal, click here: www.mydogputcyanideinmycereal.com.

Berkowitz would like to thank anyone who gives his series of stories a chance, and hopes more awareness can come for bipolar disorder this World Mental Health Day.

Jeremy Berkowitz
My Dog Put Cyanide in My Cereal
+1 248-881-4117
dogsandcereal@gmail.com
Visit us on social media:
Facebook

My Dog Put Cyanide in My Cereal Promo