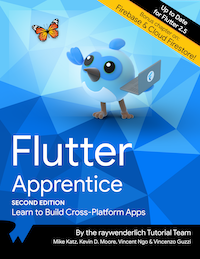 The book, Flutter Apprentice, from raywenderlich.com

Flutter Apprentice, the best-selling book from raywenderlich.com, will be available free worldwide to all Flutter developers for the remainder of 2021.

We’re thrilled that Google has chosen Flutter Apprentice as the go-to training course to learn Flutter development, as evidence of the quality of resources enjoyed by our thousands of subscribers.”
— Matt Derrick, CEO, Razeware

MCGAHEYSVILLE, VA, UNITED STATES, October 6, 2021 /EINPresswire.com/ — Given the unprecedented demand for Flutter developers, Google is partnering with Razeware–the company behind the popular online learning platform raywenderlich.com–to make its best-selling Flutter Apprentice book available 100% free for all developers for three months. As a part of this, Google will be releasing custom content throughout the three month promotion, and Razeware will be hosting a series of online virtual events with the book authors and community.

“We’re thrilled that Google has chosen Flutter Apprentice as the go-to training course to learn Flutter development,” said Matt Derrick, CEO of Razeware. “It’s evidence of the incredibly high quality of all our resources enjoyed by our thousands of subscribers.”

Flutter Apprentice is the best choice for any mobile developer who wants to harness the power of true, cross-platform development. The book goes far beyond existing Flutter documentation and simple exercises; instead, the book builds on existing mobile development fundamentals to help readers build several fully-featured Flutter apps while covering important, real-world concepts such as persistence, state management and networking, and even covers the full build and release cycle for both iOS and Android platforms — more than any other book of its kind.

“Our mission with Flutter is to enable developers to focus on what they want to build, rather than which platforms they are targeting;” said Tim Sneath, Google Director for Flutter and Dart. “With the rapid growth of Flutter, many developers are telling us that they want a fast track to skills proficiency, and so we’re delighted to offer Flutter Apprentice as a resource to help them build beautiful, fast applications for any platform. We love that this book is so practical, and we think that developers will find it a great investment of their time to get hands-on experience with Flutter development.”

Flutter is an incredible user interface toolkit that lets you build apps for iOS and Android — and even the web and desktop platforms like macOS, Windows and Linux — all from a single codebase. Flutter improves upon most cross-platform tools thanks to a super-fast rendering engine that helps you quickly build Flutter apps with full native performance. And with Flutter’s built-in Stateful Hot Reload and ability to integrate with native code, building and shipping cross-platform apps has never been easier.

Razeware is the company behind raywenderlich.com, the most popular mobile development site on the Internet. With their network of over 300 expert developers from around the world, our community has published over 4,000 videos, 2,000 articles, and 50 books over the last ten years. Our products have made a difference in the lives of thousands of developers across the world, helping them to get their first job as a mobile developer, grow their careers, and build the app of their dreams.