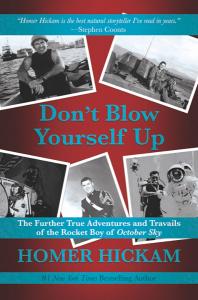 Don’t Blow Yourself Up by Homer Hickam 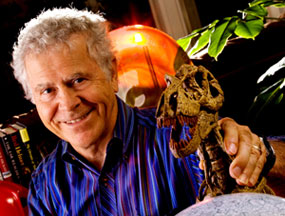 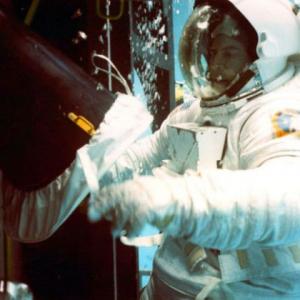 COALWOOD, WV, USA, October 12, 2021 /EINPresswire.com/ — Homer Hickam has become one of America's great raconteurs and a true global treasure. The NY Times bestselling author of 18 books has regaled audiences around the world for over two decades with his novels and memoirs, including his iconic ROCKET BOYS, the most read book in U.S. schools, which was adapted for the big screen as the now beloved classic film, OCTOBER SKY based on Homer’s life as a young rocket engineer growing up in Coalwood, WV.

But, what happened after Coalwood? Turns out…a whole lot. Find out for your self, as Homer’s wit and homespun charm are now recaptured in his engaging, funny, exciting and warm-hearted new memoir DON'T BLOW YOURSELF UP, slated for release on October 26th, and currently available for Amazon pre order.

In DON'T BLOW YOURSELF UP, Homer recounts his amazing life’s journey. In college, Homer helped build the world's biggest, baddest game cannon, Virginia Tech’s iconic “Skipper” which is still fired today on national TV whenever the Hokies score a touchdown. Hickam fought through some of the worst battles in Vietnam. He became a deep sea diver at far flung oceans and islands around the globe. Hickam discovered sunken WWII German U-boats, which led Homer to write the first ever definitive account of a secret World War II naval battle just off the North Carolina coast. He befriended a young Tom Clancy and a younger Jake Gyllenhaal (who played Homer in the movie “October Sky”), made a desperate attempt to save the passengers of a sunken river boat, receiving a Medal Of Honor for his efforts. Homer carried the Olympic torch, trained the first ever Japanese astronauts and was shown a secret replica of “Sputnik” by the same Russians who launched the space race. He has discovered five T-Rex skeletons in the badlands of Montana, taught David Letterman to scuba dive on national television, was part of the team that fixed the Hubble Space Telescope, helped inspire both Elon Musk and Jeff Bezos to enter the space race and much more. Although told with humor and wit, Hickam does not shy away from the pain and hardship endured and the mistakes he made during the tumultuous decades since his life began in the town he made famous—Coalwood, West Virginia.

Homer Hickam is available to speak to the media about his new book DON'T BLOW YOURSELF UP, and weigh in on topics including NASA, veteran’s issues, the mining industry and more. For more information on Homer, visit his website at http://www.homerhickam.com. Hickam has appeared on every major television and radio network, and has written for the Washington Post, USA Today, the New York Times, Los Angeles Times and many other publications.