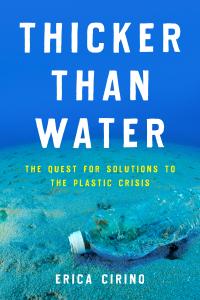 Thicker Than Water is an eloquent call to recognize the scale of the plastic crisis and reimagine the systems churning out waves of plastic waste.

The book you need to read if you want to understand ocean plastic pollution but also be part of the solution.”
— Paul Greenberg, author "Four Fish and the Climate Diet"

WASHINGTON, DC, UNITED STATES, October 12, 2021 /EINPresswire.com/ — Fifty percent of ocean plastic comes from just four items: food containers, wrappers, plastic bags, and bottles. But the consequences of plastic use and pollution are far more insidious, and harmful, than a water bottle floating in the sea. They span from tiny particles of microplastic in our air, food, and water to petrochemical plants, garbage incinerators, landfills, and illegal dumps spewing pollution across underserved communities.

In "Thicker Than Water: The Quest for Solutions to the Plastic Crisis" (Publication Date: October 7, 2021), journalist Erica Cirino takes readers on a global journey to meet scientists and activists on the front lines of the plastic crisis as they work to uncover the extent of plastic pollution, reveal its detrimental effects, and develop solutions for a healthier world.

Cirino paints a full picture of how plastic threatens the health of people, wildlife, and the planet. She travels aboard a plastic-hunting sailboat to cross the Great Pacific Garbage Patch, a shape-shifting soup of plastic debris spanning over 600,000 square miles that harms marine life. She visits labs from New York to Denmark, speaking with scientists doing cutting-edge research on how nano- and microplastics impact the people and animals inadvertently ingesting, inhaling, and drinking them.

And in St. James, Louisiana, Cirino meets community leaders fighting a proposed plastic factory threatening the health of a neighborhood already harmed by pollution and environmental racism. She shows how the plastic crisis is a driver of environmental injustice, as some nations import others’ trash and plastic particles, and toxic air emissions threaten predominantly Black and rural communities where materials are commonly manufactured.

From a plastic bag at the bottom of the Mariana Trench to microplastic particles in our food, plastic pollution can seem inescapable. Cirino details an array of inventive solutions, including laws banning single-use plastic items and innovative plastic replacements. However, true change will require accountability, reevaluating a toxic throwaway culture, embracing a circular economy, and confronting systemic inequities.

"Thicker Than Water" is an eloquent call to recognize the scale of the plastic crisis and reimagine the systems churning out waves of plastic waste.

Erica Cirino is a science writer and artist who explores the intersection of the human and nonhuman worlds. Her photographic and written works have appeared in "Scientific American," "The Guardian," "VICE," "Hakai Magazine," "The Atlantic," and other esteemed publications. She is a recipient of fellowships from Woods Hole Oceanographic Institution, Craig Newmark Graduate School of Journalism at CUNY, and Safina Center, as well as several awards for visual art.

Founded in 1984, Island Press works to stimulate, shape, and communicate the information that is essential for solving environmental problems. Today, with more than 1,000 titles in print and some 30 new releases each year, it is the nation’s leading publisher of books on environmental issues. Island Press is driving change by moving ideas from the printed page to public discourse and practice. Island Press’s emphasis is, and will continue to be, on transforming objective information into understanding and action. For more information and further updates be sure to visit www.islandpress.org.