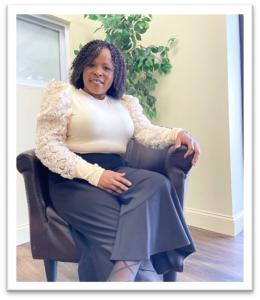 CEO of ESPOIR Youth Programs, Inc., Samarth Joseph, talks about the struggles of growing up in Haiti and moving to the United States at a young age.

NEW YORK CITY, NEW YORK, UNITED STATES, October 13, 2021 /EINPresswire.com/ — Born and raised in Haiti by her grandparents, Samarth Joseph moved to the U.S. at the tender age of 16. Despite difficulties and hurdles, she has been able to establish herself as one of the leading keynote speakers in New York. Her book, “It’s Not Over Yet!!” highlights her struggles as an immigrant trying to find her voice and place in a new country.

Life has not been easy for Joseph, who struggled to adjust to a new culture and language at first. She struggled to get an education, maintain her relationship with her parents, and accept herself.

“I always felt alienated because I could not speak the language and I was unaware of the culture I was being exposed to. I spoke French and Creole, while others spoke English. I struggled to find my place in an unknown world. But God was with me. It’s thanks to Him that I was able to achieve my goals. This book is about how there are opportunities in every situation God puts you in and how it’s crucial to win the race mentally, before you win it physically,” Joseph commented, talking about the struggles she faced when she moved to the U.S., and what her book entails.

Before founding her organization, ESPOIR Youth Programs Inc., she taught at various educational institutes and has been a guest speaker at various events, such as “Becoming One with the Environment,” which was hosted by the Global Third Way and was held at the United Nations Headquarters in New York City.

The book focuses on Joseph’s childhood years between Haiti and the U.S, how her life changed when she permanently moved to the U.S, and her struggle to complete her education.

“When I enrolled into college, I had to work multiple part-time jobs to be able to survive. The commute and lack of sleep took a toll on my mental health. But I didn’t give up because I knew that God would help me achieve my goals. I saw my mother struggle to provide for her kids so I worked day and night to make sure I made my family proud,” Joseph said, talking about her struggles to achieve an education, and how she put her faith in God to help her accomplish her dreams.

Today, she is a lifetime member of the United Nations Association of the United States of America and has published several scholarly articles in various publications. She also has a scholarship program for underprivileged students called the “SJ It’s Not Over Yet Scholarship Program.”

Samarth Joseph is a leading keynote speaker and founder of ESPOIR Youth Programs, Inc. She is a published author and lifetime member of the United Nations Association of the United States of America, as well as the Empire Who’s Who Executive and Professional, and a lifetime member of the Epsilon Rho Chapter. She also sits in various boards, such as the Advantage Care Health Centers and Westbury Carle Place Chamber of Commerce. ESPOIR Youth Programs, Inc. also works with local churches to provide food and education to the less fortunate.