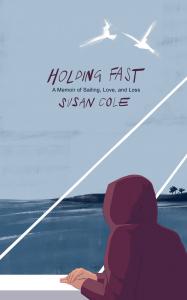 From Madison Avenue to Riding Out Hurricane Mitch in Guatemala: Reluctantly Leaving Everything Behind to Follow Her Husband's Dream, a Woman Finds Herself

Susan Cole’s Holding Fast: A Memoir of Sailing, Love, and Loss will be published by White Bird Publications on October 19th, 2021. The Book Launch Party will be hosted by Blue Cypress Books in New Orleans on October 19th, 6:00-7:30 pm. Media invited.

It is Cole’s first book. She is in her 70s, and at work on her next book, proving that it is never too late to follow your dreams.

She met the man, John Russell, who would become her husband when they were in their twenties. He dreamed of sailing away. Cole dreamed of settling down. She had never sailed before.

Their first home was a romantic, leaky 1903 ferryboat. It sank.

When their daughter was seven, they left their quaint Connecticut farmhouse behind and sailed to the Caribbean. Cole’s journey took her from the glitzy world of Madison Avenue advertising to riding out Hurricane Mitch, the largest hurricane on record at the time, on a sailboat in Guatemala. She hadn’t wanted to go in the first place but ended up on a life-changing odyssey.

Years later, Cole’s life forever changed after John passed away, but the courage that she found when she stepped outside her comfort zone and sailed off stayed with her.

Susan Cole has lived on or around sailboats for more than thirty years. In between sails, she earned a B.A. at Barnard College, an M.A. at Columbia University, and for many years, ran a successful market research firm in New York. Her essays have appeared in literary journals and sailing magazines.

Cole was born in Cleveland, Ohio. She has lived in New York, Connecticut, Florida, and Mexico; and now lives in New Orleans with her cat.

“A wife follows her husband to sea and finds herself along the way in this memoir… A perfect, realistic counterpart to Amity Gaige’s Sea Wife (2020), Cole’s moving memoir is emotionally astute… Vivid characterizations… The author’s voice is so assured…” —Kirkus Reviews

“Most cruising yarns are written by men, for men… ‘Holding Fast.’ is a lyrical tale of a young woman (and mother) learning the ropes—of her floating home, her marriage, and life itself.”—Cap’n Fatty Goodlander of Cruising World magazine

“Thoroughly absorbing… Vivid story of survival and adaptation that operates on many different levels, promising to attract not just readers of true-life adventure, but those who want stories of endurance and moving forward…Enlightening, moving.”—D. Donovan, Senior Reviewer, Midwest Book Review