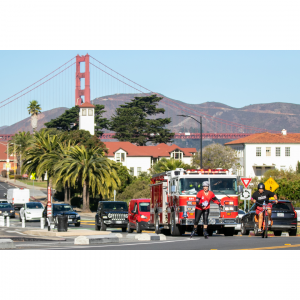 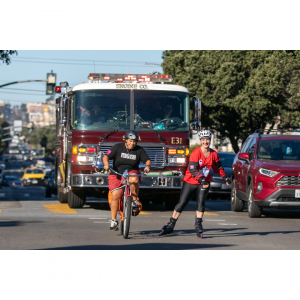 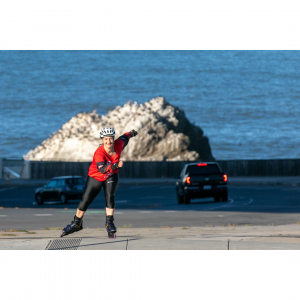 On Friday Christine Ichim rollerbladed across San Francisco in a procession of fire engines to raise awareness for firefighter cancer prevention.

You matter, your donations matter, your advocacy matters. You are the hope for all these firefighters whose greatest threat to life is not fire but cancer”
— Christine Ichim

SAN FRANCISCO, CA, USA, October 17, 2021 /EINPresswire.com/ — Christine Ichim became the first woman to rollerblading across Canada for leukemia research. Twenty five years ago on October 15th, she completed her 5000 mile trek. On Friday she commemorated that achievement by rollerblading across San Francisco to raise awareness for firefighter cancer prevention.

“Research saves lives”, Ichim stated at a ceremony held at San Francisco Fire department headquarters after her skate across the city. “I know now in my heart of hearts that there is nothing that is impossible. Cancer is the number one cause of line of duty deaths in the fire service. It is just not fair that those who would put their lives on the line for us would have their own lives endangered by the insidious disease of cancer. We need to fight it with everything we have, because we can make a difference.”

Escorted by a relay of SFFD engines and ladder trucks from nine separate firehouses, Ichim proceeded from one end of the city to the other. Ichim started her commemorative skate at Ocean Beach, dipping her skates in the ocean to initiate the event. She proceeded to make her way across San Francisco on skates along with SFFD LT. Julie DeJarlais accompanying her on bicycle, and trailed by engines and other apparatus along the way. They rolled by nine firehouses to highlight their service and the existential threat to their personnel presented by cancer from toxic exposures in the workplace.

Once Ichim reached the department headquarters, she was greeted by Chief Jeanine Nicholson and members of the command staff, along with honored guests such as the Consul General of Canada Rana Sarkar and Tony Stefani, head of the San Francisco Firefighter’s Cancer Prevention Foundation.

Sarkar presented Ichim with a letter of appreciation from the government of Canada, and Stefani accepted the donations Ichim collected as a result of her fund-raising efforts.

Ichim, inspired by Terry Fox, embarked on her journey to give hope to her mother who had terminal leukemia. “I had promised her that I would fight for her until the end. When she was given six months to live, I put on a pair of rollerblades to skate across Canada to fund a clinical trial in immunotherapy. I skated to fund research. I skated to give her hope. I skated because I had promised her I would not sit and watch her die,” said Ichim.

Ichim began her scientific quest then and there, building a laboratory in the basement of the family home in Kitchener, Ontario when she was still in grade school and devoting her time and energy to learning more about the foe she was fighting.

When Ichim was 18 she conceived the idea of rollerblading across Canada to raise funds and awareness for leukemia research, and after lining up support from various community organizations and local firms she embarked on her journey from Victoria BC. Six months and 5000 miles later she rolled into St. John’s, Newfoundland, completing the epic voyage and raising over $165,000 for cancer research. Her mother lived long enough to see her daughter return home and hung in long enough for doctors to discover the miracle drug Gleevec that dramatically changed the course of the disease.

Inspired by the ability of research to save human lives, Ichim is now the founder and CEO of Florica Therapeutics, a biotech startup in San Francisco named after her mother. She wanted to commemorate the anniversary of her crossing of Canada by shining the spotlight on the scourge of cancer in the fire service.

“We visited the firefighters memorial in Sacramento. I looked at the names of fallen firefighters, whose names were carved in stone. I saw at least a dozen names of people I knew, coworkers, friends of mine, recruits whom were lost to cancer.” said Terry Hogue (ret.) Rescue Captain for SFFD and Ichim’s husband. “My eyes welled with tears to see that some of the people we had lost to cancer were people I had trained in the fire academy, the next generation that was suppose to take over for us.”

Ichim came to San Francisco to complete postdoctoral research at Lawrence Berkeley National Labs. “There are many great cities in the world but San Francisco is the city where dreams come true. San Francisco is also a leader in social justice, it is a place where voices are heard and where voices matter. Dreamers come here to change the world. I too am a dreamer, and I dream of the day where we can cure cancer,” said Ichim.

“We can make a difference. Every person matters. I remember every person who gave me a high-five, who honked for support, who made a donation. You matter, your donations matter, your advocacy matters. You are the hope for all these firefighters whose greatest threat to life is not fire but cancer.”

The San Francisco Firefighters Cancer Prevention Foundation is committed to the prevention and early detection of cancer and providing access to cutting edge care for active and retired members of the San Francisco Fire Department and their families. Our goals are based on scientific research, education, cancer screening and health navigation. Through this research and advocacy we aim to improve public health and end this threat of job-related cancer in the firefighter profession.