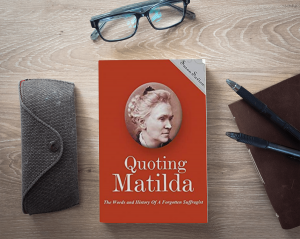 that of Matilda Joslyn Gage usually evokes the response, "Who?" Yet, this amazing woman contributed equally for many years”
— Susan Savion

PITTSBURG, CA, USA, October 19, 2021 /EINPresswire.com/ — Experienced author and educator, Susan Savion, honors a little-known feminist from the 1800s in Quoting Matilda: The Words and History of a Forgotten Suffragist. Matilda Joslyn Gage was a pioneering suffragist, abolitionist, and Native American rights activist. Gage was deeply involved in the women’s movement from 1852 until her death in 1898. A serious scholar and researcher, Matilda was familiar with the history of ancient civilizations when women ruled and the sad history of the burning of women as witches and the blame women experienced for many centuries. Consequently, she was a strong proponent of separation of church and state. Though she was best known for her feminist and suffragist activities, she was “written out of history” for many years because she was considered to be too radical, a woman way ahead of her time. You will find her immensely quotable in this empowering compilation of Matilda quotes organized by twenty different topics and enhanced with biographical and historical details and over 30 photos.

Matilda Joslyn Gage, who contributed for over 40 years as part of the triumvirate with Susan B. Anthony and Elizabeth Cady Stanton, helped write the first three volumes of the History of Woman Suffrage together. Gage was a noted speaker and writer on topics and works related to suffrage, as well as many other issues pertaining to women’s rights. She was born in upstate New York to an abolitionist family. Gage’s childhood home and her home in Fayetteville, New York, both harbored escaped slaves. She risked imprisonment by agreeing to be one of the stops on the Underground Railroad. Her Greek Revival home is now an award-winning interactive museum.

It features the Underground Railroad Room, The Haudenosaunee Room, The Wizard of Oz Parlor, The Women’s Rights Room and more.

Gage’s determination to gain the rights of property ownership, governance, and equality of power for her 19th-century sisterhood led her to challenge voting restrictions, publish a newspaper, and take on top positions in the National Woman Suffrage Association. She co-authored The Declaration of Rights for Women in 1876. It was presented at the Independence Day ceremonies in Philadelphia.

After writing numerous articles about the Haudenosaunee, she was honored by being adopted into the Wolf Clan of the Mohawks and was named “She Who Holds the Sky.” Gage’s battle for the rights of all Native Americans, enslaved persons, and anyone else hit by overbearing government control led to passionate speeches and much social justice awareness.

Gage’s life-long advocacy for justice and equality is a product of the ideas of Theosophy and Unitarianism and wisdom gained from her parents.

Her magnum opus, Woman, Church and State openly criticized organized Christianity for its major role in the oppression of women. She championed women inventors in Woman as an Inventor. “The Matilda Effect” is now the label given for women who achieve something but a man is given the credit for it. Her son-in-law, L. Frank Baum, incorporated much of her wisdom into his fourteen Oz books.

This is a munificent work from a maverick author providing a story and moving past stories that should be made relevant in the current times. Catch Susan Savion’s Quoting Matilda at the October 2021 American Association of School Librarians (AASL) National Conference. Quoting Matilda: The Words and History of a Forgotten Suffragist

Book copies are available at http://susansavion.com/

You can also check it out at Amazon, Barnes & Noble, and more online book retailers, including the Seneca Falls Book Store, The Onondaga Historical Society, The Gage House and others.

About Authors Press
Authors Press is an online publishing company and book reseller catering to the needs of both experienced and aspiring authors as well as readers. They offer the best publishing solutions for full-time and independent authors. The company’s team of proofreaders, editors, designers, and publishing professionals are committed to achieving industry standards for their client’s work to be published, marketed, and sold.