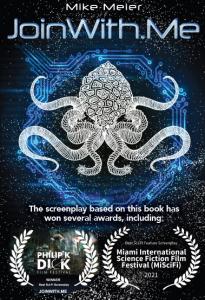 Cover of the 2nd edition of JoinWith.Me by Mike Meier 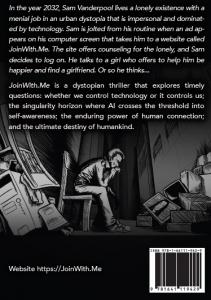 Back Cover of 2nd edition of JoinWith.Me by Mike Meier

The sci-fi story JoinWith.Me by Mike Meier asks an intimidating question: “Do you want to see the future?” and admonishes “Be careful what you ask for.”

…while it is startling to see how the Internet and technology have the ability to control us as a society, I … emphasize the enduring power of a human connection, something AI cannot replicate…”
— Mike Meier, author of the screenplay & novel JoinWith.Me

MIAMI BEACH, FLORIDA, UNITED STATES OF AMERICA, October 26, 2021 /EINPresswire.com/ — The debut novel of Mike Meier “JoinWith.Me,” published in 2020, is a sci-fi thriller that asks timely questions: whether we control technology or it controls us; the singularity horizon where AI crosses the threshold into self-awareness; the enduring power of human connection; and the ultimate destiny of humankind. The movie screenplay based on this book has received multiple awards, including:

The second edition of the novel is now available on Amazon. “Since the publication in July of last year, I have received numerous comments from readers. Based on those comments, I decided to work through the story one more time and clarify the questions that were raised about the unthinkable – the possibly inevitable development of human society as a whole,” explains Mike Meier.

In JoinWith.Me, a man named Sam Vanderpool lives a solitary and isolated existence, working a menial job in an urban dystopian society, in the not so distant future, dominated by technology. After an ad pops up on his computer screen, Sam contacts a website claiming to offer counseling for lonely people. Upon entering the site, he speaks with a girl who offers to help him. However, Sam soon discovers this girl is an omnipresent creature who stalks his every move and lurks behind every chip, screen and interface. Desperate to escape the mind control, Sam moves off the grid by living on the streets, and in doing so makes friends, ultimately discovering the connection he was seeking.

Technology is an ever-growing part of daily life, with society becoming increasingly dependent upon it and even addicted to it. For author Mike Meier, the moment where artificial intelligence crosses the threshold into self-awareness is inevitable, yet the question of whether technology actually allows humanity to flourish in a futuristic world remains to be seen.

Meier posits that eventually all of humanity will converge in technology. “It is the ultimate destiny of humankind, and while it is startling to see how the Internet and technology have the ability to control us as a society, I really want to emphasize the enduring power of a human connection, something AI cannot replicate,” he says.

The second edition of JoinWith.Me is now available for purchase online at Amazon.

Mike Meier grew up in a blue-collar housing project in Germany. On his own since his teens, he has lived in several different countries, including Argentina and Japan, and worked jobs such as washing dishes, repairing bicycles, and painting homes. When he’s not writing books or screenplays, you’ll find him playing Latin and Flamenco guitar in the Washington, DC area. He holds a Master’s degree in political science, as well as a J.D. and LL.M. Foretelling and magic spells are in Mike’s blood— his grandfather was the 1930s traveling magician and fortune-teller known as Wladi-Kami.

In the year 2032, Sam Vanderpool lives a lonely existence with a menial job in an urban dystopia that is impersonal and dominated by technology. Sam is jolted from his routine when an ad appears on his computer screen that takes him to a website called JoinWith.Me. The site offers counseling for the lonely, and Sam decides to log on. He talks to a girl who offers to help him be happier and find a girlfriend. Or so he thinks…

When she tells him to give all his money to a stranger, Sam reports her to the police, but they brush him off. He decides to leave town, but his flight is mysteriously canceled. Where there is a chip, a screen, or an interface, there she is. In desperation, he abandons the life he knows and becomes one of the city's homeless, scrounging for money and befriending transients: Gabrielle, an immigrant with the voice of an angel and a direct connection to God, and Joey, an armless man who makes art with his feet…

JoinWith.Me is a dystopian thriller that explores timely questions: whether we control technology or it controls us; the singularity horizon where AI crosses the threshold into self-awareness; the enduring power of human connection; and the ultimate destiny of humankind.
Website https://JoinWith.Me

JoinWith.Me trailer for the book & screenplay. The book is now available on Amazon.