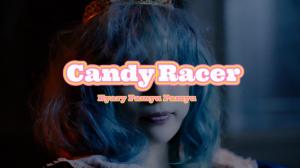 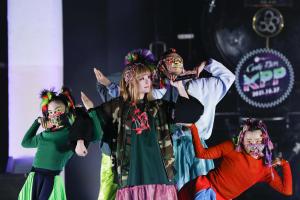 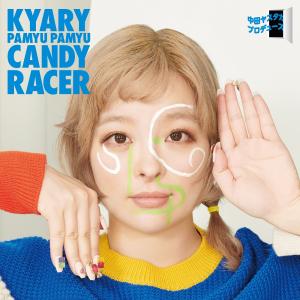 For the video, Kyary specifically asked to work with up-and-coming video director malloon ( koe inc.) featured on BNN’s annual list “100 Japanese Motion Graphic Creators” in 2020 and 2021 while still attending college, and is known for his “new style” music videos. Together with art director KASICO, （ koe Inc.） and is known for his pop and graphic design work in advertising, malloon paid homage to horror movies with the new “Candy Racer” video.

Mixing various comedic gimmicks and looping expressions repeated to the song’s beat, the video features three friends visiting an old mansion, haunted by a ghost played by Kyary, who tries to scare away visitors. One by one, the young men experience inexplicable horrors inside the mansion, confirming that it is indeed haunted, and flee in fear. The video represents an artistic vision not seen previously throughout Kyary’s career and just as ambitious as her new album Candy Racer.

Available now on CD (in Japan only) and digitally (worldwide), Candy Racer debuted at #1 on iTunes EDM chart in Japan last week. In celebration of Candy Racer’s release, Kyary hosted a global livestreaming event the day the album dropped (10/27). The special event lived up to the hype, featuring a one-night-only-production from Kyary, who performed a number of songs off the new album. If fans missed it, there’s still time, as the performance will be available to stream through November 17th ( https://zaiko.io/event/343400 )

True to the 28-year-old Tokyo artist’s electronic roots and eclectic style, Candy Racer shows the J-pop singer’s growth and desire for constant evolution. All eleven colorful tracks on Candy Racer were produced by Yasutaka Nakata, a legendary figure in the Japanese electro/pop scene and one half of the music duo CAPSULE, who has produced all five of Kyary’s albums.

About Kyary Pamyu Pamyu:
Born on January 29, 1993, in Tokyo, Japan, Kyary Pamyu Pamyu made her major label debut in the summer of 2011, after graduating from high school, with the mini-album Moshi Moshi Harajuku (released August 17, 2011) produced by Yasutaka Nakata. In May 2012, she released her first full-length album, Pamyu Pamyu Revolution, which debuted at No. 1 on the Oricon Daily Chart, and also ranked No. 1 on the iTunes charts in Japan and on electro charts around the world. In 2013, Kyary Pamyu Pamyu successfully completed her first world tour (13 cities in 8 countries and regions) and her second album Nanda Collection was released in June of 2013, which also debuted at No. 1 on the Oricon Weekly Chart. In 2014, she completed her second world tour (15 cities in 11 countries) with great success, and her third album Pika Pika Fantajin was released simultaneously in 15 countries on 4 continents, including North and South America, Europe, Oceania, and Asia. It was the second consecutive album to reach No. 1 on the Oricon Weekly Chart. She also completed her hall tour "Kyary Pamyu Pamyu no Kumo no Ue no HEAVEN'S DOOR" (17 concerts in 15 cities), which drew over 35,000 people, and her largest arena tour “Kyary Pamyu Pamyu no Colourful Panic TOY BOX” (9 concerts) with a great success. In 2016, the fifth anniversary year of her debut album, she released her first best of album KPP BEST and held her third world tour as her first anniversary year. In 2018, she held her fourth world tour, released her fourth album Japamyu, and took her "Hoshikuzu no Cherry Martini" tour to 20 locations across Japan.

In 2019, she announced the “Otonokuni Live Tour," which would be held at places related to Japanese history and tradition. In March, the first leg of the tour was a special one-night-only live performance at the Izumo Taisha Shrine, a Japanese heritage site. The second event was a live performance in collaboration with traditional Kabuki at Minami-za, Japan's oldest theater, which has been in existence since the Edo period. Kyary Pamyu Pamyu continues to fascinate her fans with her free-spirit and original expressions that one would never imagine from her cute appearance. Her presence as an icon of "Harajuku," a combination of artist and fashion activities, has attracted attention from all over the world. In 2021, the 10th anniversary year of her debut, she launched a new label KRK LAB as a place for new schemes involving the whole world. Plus, Kyary Pamyu Pamyu released her single “Gentenkaihi" on August 17th, the exact date of her anniversary milestone. Kyary has released her much anticipated fifth full-length album “Candy Racer” on October 27th.

“…probably the planet’s most creative pop star…”
– The Fader