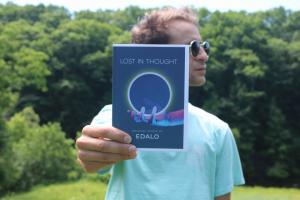 Edalo and his new book Lost In Thought

In his debut publication, Angelo "Edalo" Marinelli shares his collection of 100+ written works from over a decade's time

BUFFALO, NEW YORK, UNITED STATES, November 10, 2021 /EINPresswire.com/ — Edalo, a successful composer and producer has announced his first self-published book. “Lost In Thought” was compiled and created during the height of the pandemic when Edalo re-discovered poems written on scraps of napkins, old notebooks and journals. With more than a decade worth of writing, we gain a look into his life, music and personal thoughts.

“The book has actually been released for a few months, but I wanted to sit on it because it is such a huge accomplishment for me. I’ve been writing and making music since I was a kid, so to announce a book is something I never would have imagined doing. It’s exciting to see this dream come to fruition”, says Edalo.

In exactly one month, Edalo will be hosting a Book Launch Event on December 10, 2021 at 6 PM at Convergence Coworking, 4900 Lake Shore Road, Hamburg, NY 14075. Register now on Eventbrite. Seats are limited and will be first come, first serve.

Edalo just completed his East Coast Tour in October 2021 where he headlined 10 cities, including Charleston, SC, Washington, D.C. and Montpelier, VT. Another tour is already in the works. Edalo adds, “To complete tour and have a book announcement waiting is a blessing. I love sharing my work with the world.”

"Just like his presence on stage as a musician, Edalo the poet has a humble yet permeating style. With simplistic phrases that cut straight to your heart, Lost In Thought brings you into a contemplation of wishes and hopes, of self-acceptance and letting go”, says Chelsea Grinstead, Charleston City Paper.

You can find “Lost In Thought” on Amazon, Kindle and listen on Audible (recorded at The Hertel SoundLab). If you’re in Western New York, you can find his book at Turn the Page Book Store and The House of Jacob. Additional in-store locations TBD. Follow along for live updates at www.edalomusic.com and on social media @lostinthoughtbyedalo.

Edalo is a Buffalo, NY born and raised musician, composer, and producer. Edalo's first full-length album, Faith, released in 2015, made it into the iTunes Top Instrumental Music Albums Chart in its release year. In 2017, Edalo completed his second album, California Rush, his sophomore project with independent label Castle Music Group. He debuted this album in the same year at SXSW Music Festival in Austin, TX. In 2020, Edalo released Driftin’ and headlined his first tour in March – kicking things off in his Buffalo, heading to NYC, and rounding things out in Ohio. Continuing his success in 2021, Edalo released multiple singles, including “Break Free” w/ Salvo.