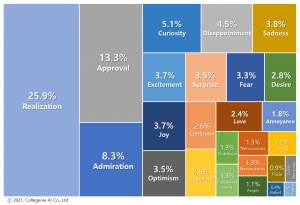 Based on an AI sentiment analysis, the crisis-related emotions, such as fear, surprise, anger, etc., consisted of only 9.5% of the total emotions, while 32.5% were occupied by positive emotions such as approval, admiration, excitement, and more. 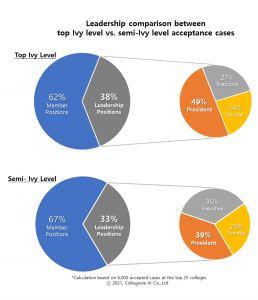 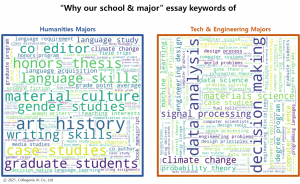 The importance of major fit seems apparent when analyzing the “why our school & major” essays. For example, the major keywords found among the application essays of technology and engineering vs. humanities related majors varied significantly.

New AI assesses the key elements in an applicant’s essays and extracurriculars as an admissions officer would.

SAN RAMON, UNITED STATES, November 11, 2021 /EINPresswire.com/ — According to the American School Counselor Association, due to a shortage of college counselors, there are 8 million students who cannot receive any help during the college application process. The problem of inequity is chronic in the college application process because the advice from experienced counselors comes with a heavy price tag.

Good news — there is now an innovative approach to this problem. Collegenie AI has recently launched a beta service for EssayFit AI (www.essayfit.com), to become the first AI-powered online solution to evaluate a college applicant’s personal statement, extracurricular activities, college-specific supplemental essays, and acceptance chances. Collegenie AI has an exclusive data partnership with Admitsee.com, a New York based company that has crowdsourced over 220,000 acceptance cases consisting of application essays and academic credentials.

With the advancement of natural language processing and AI technology, Collegenie AI recently initiated a deep dive using 6,000 accepted cases to the top 25 colleges to demystify some common beliefs among college applicants.

Question #1 Will sadder, crisis-related essays help me stand out?
Many students feel that they need to write about a monumental event or crisis in their lives to give the reader a lasting impact. Based on an AI sentiment analysis of 27 detailed emotions across all 6,000 cases, crisis-related emotions such as fear, surprise, anger, disgust, and nervousness consisted of only 9.5% of the total emotions found, whereas 32.5% were occupied by positive emotions such as approval, admiration, excitement, joy, and optimism. When singling out the sad essays in our analysis, emotions such as sadness, grief, and remorse only added up to 11.4%, still largely overpowered by warm, positive emotions.

Simply put, when composing their essays, most accepted students chose stories that can demonstrate their positivity over sad or crisis-oriented ones.

While students agonize over selecting a unique or eccentric topic to stand out, ironically, the majority of accepted students chose to write about nearby, everyday incidents in their school, home, or town, involving family members and close friends.

So, what made these ordinary topics stand out? A deeper look into the key sentiments reveals enlightening answers. Among 27 emotions, the following 4 emotions stood out: realization (25.9%), approval (13.3%), admiration (8.3%), and curiosity (5.1%). Realization is essential for college essays because it comes with a shift in one’s perspective. Most essay prompts ask about lessons, motivations, and growth, and such qualities essentially arise from realization. Approval and admiration are qualities that reflect an applicant’s attitude towards life and their peers. Lastly, displaying curiosity suggests one’s drive to learn, take risks, and try new things in college.

Often, college counselors suggest not to write about a service trip to a distant country for one’s personal statement. Data has it that meaningful lessons usually come from trivial, ordinary things in everyday life.

Question #3 Is major fit important for colleges?
Many students may wonder if applying to college as “undecided” is easier than declaring a major. According to USC’s undergraduate admissions blog “Mythbuster”, the answer is no. The article suggests that because almost all majors are highly competitive, demonstrating one’s major-oriented strengths through academic and extracurricular achievements is key to acceptance.

Question #4 Do I really need big leadership positions and awards to get into top schools?
Data analysis on the awards and extracurriculars shows that the answer is closer to a “yes.”
Among accepted cases to the top 25 colleges, we first grouped the schools with the highest level of selectivity, such as Harvard, Yale, Princeton, Stanford, MIT, Caltech, UPenn, and Brown. Then, we compared the extracurricular statistics with all other colleges with a slightly lower admit rate, including Northwestern, Cornell, Johns Hopkins, UMICH, CMU, USC, Emory, etc.

Simply put, it seems that increasing your chances of acceptance requires maintaining a positive attitude and searching for the defining moments that shifted your perspective. Furthermore, having an action plan to strengthen your leadership and major fit would complete the picture.

EssayFit AI can provide objective and personalized advice for college applicants based on exclusive data and AI-driven analysis. Exclusively during the beta testing period, all of EssayFit AI’s premium modules are being offered for free with promo code (EF21GL1B) to make good on our attempt to level the college admissions playing field.