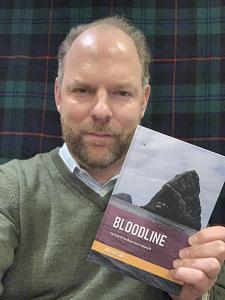 Nick Bastin and his book BloodLine 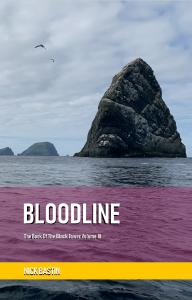 The cover of BloodLine 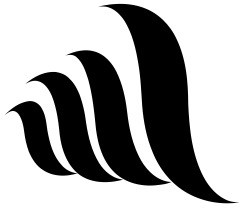 BloodLine is the third and final book in the Black Tower trilogy imagining a world where Bonnie Prince Charlie wins the Battle of Culloden and splits the highlands and islands of Scotland off from the rest of the UK to create the Gaelic Republic. Everything else about it is contemporary, except for the maintenance of Gaelic martial culture in the Republic, which constantly twists the tail of its bigger and more powerful neighbour.

I have tried to imagine how the sense of “otherness” that existed towards the highlands in the mid-18th Century, when it was inaccessible and dangerous to visit, where the inhabitants spoke a different language and had their own distinct and unfamiliar culture, would update to the 21st century.

Hopefully, it has something for everyone – action, adventure and excitement, along with a sprinkling of Gaelic language, culture and history which might be new and interesting to many readers.

How did it come about?

My Mother’s family come from Islay and the west coast of Argyll and I have long had a deep interest in the area. In fact, I met my wife, who is from the Isle of Skye, while studying Gaelic at an evening class many years ago!

For those with a love of Gaelic culture, or a shred of humanity, the destruction wrought by the British government after the Battle of Culloden, when it ruthlessly and relentlessly persecuted the Gaelic people, is certainly unequalled in British history. The empty glens that we see now were not empty in the past but populated with a vibrant society. This was largely swept away, first by active suppression and then by the clearances. The sense of injustice and hurt is still very real among Gaelic communities.

Who are the main characters?

The books are centred around the Clan MacNachtan and their base at Dunderave Castle at the head of Loch Fyne in Argyll. Gillespie is the unfortunate distant cousin who is kidnapped from his home in Antrim, Northern Ireland at the beginning of the first book. We see much of the narrative through his “newcomer’s” eyes.

The Clan has a range of characters but the most important are Nin and Charlie, who are part of the Clan’s muscle, Fiona and her daughter Mara, Kirstie who runs their online gaming empire, and LeroyMar and his sister Shonique from the Clan’s Jamaican outpost.

Then there is the evil John Lamont, a cruel schemer who is determined to “modernise” the country in his image, and MacCailean Mòr, the leader of the Campbells, the mistrusted neighbouring clan.

Finally, there are the Greagarach, the MacGregors, a feared outlawed band led by the charismatic Alasdair MacGregor, who has plenty of tricks up his sleeve.

Do you see yourself in any of the characters?

Well, if I said John Lamont you would definitely have reason to be worried! I suppose most authors put a little of themselves in all their characters, to make them come to life off the page. Perhaps the most obvious choice would be Gillespie as the outsider, but he’s a bit wet for the first few books. I wouldn’t say I identify with any one character, although the glamour of Alasdair MacGregor is quite alluring and fun to write!

Would you and your main character get along?

I deliberately wrote Gillespie as a bit of an “everyman” so I could use his eyes to show this world to the reader. He has a rough ride and slowly gets to grips with being on the rollercoaster of life in the Republic. While he starts off as a fish out of water, he has a resolve which carries him through and that is appealing.

Who is it aimed at? What sort of reader do you think will like it?

I think that anyone that likes a thriller will find a lot to enjoy. Of course, if you have an interest in Gaelic, the highlands or Scotland then there are lots of references that you will enjoy along the way, but first and foremost it is an adventure.

How long did it take you to write this book? Did you have to do a lot of research?

I wrote BloodLine over the course of a year. One of the most important, and enjoyable, bits of research I had to do was to go to St Kilda, deep into the Atlantic off the west coast of the Outer Hebrides. In the books it features as the feared prison archipelago. It is an extraordinary place and thrilling to visit, particularly after the first COVID lockdown when the sense of wild remoteness was much appreciated.

What is next for you?

I do have plans for another trilogy about the Gaelic Republic and have started writing the first book. However, I have slightly put it to one side as I have been overtaken by a project to compile the war diaries and letters of my great, great uncle, who served at Omdurman, the Boer War and WWI. I have been elbow deep in diaries and deciphering handwriting – which has been fascinating. But the lure of writing about the Republic is tugging at my conscience and I won’t be long before I throw myself back into that turbulent world!