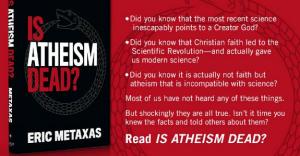 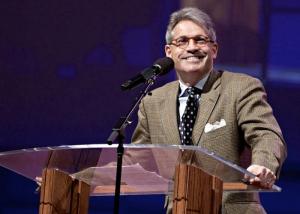 Our outreach has focused especially on university campuses and nations that are dominated by skeptical attitudes toward the core truths of Christianity”
— Dr. Tom Woodward

CLEAWATER, FL, USA, November 18, 2021 /EINPresswire.com/ — Best-selling author Eric Metaxas will be the keynote speaker on Friday, Jan. 14, 2022, at the Holy Trinity Greek Orthodox Church. The event is co-sponsored by New Harvest Missions International and the C.S. Lewis Society. A VIP reception will take place at 5:30 p.m. A dinner program is scheduled for 6:30 p.m.

The church is located at 409 S. Coachman Road, in Clearwater, FL, 33765. General admission for the dinner program is $100 while the private VIP Reception with Metaxas prior to the dinner is $250. For tickets, visit https://newharvestmissions.ticketspice.com/eric-metaxas-vip-reception-dinner

His most recent book "Is Atheism Dead?" will be the centerpiece of his keynote presentation.

In April 2015, Metaxas began hosting “The Eric Metaxas Show,” which is syndicated by the Salem Radio Network and broadcast from the Empire State Building. In 2012, Metaxas was the keynote speaker for the National Prayer Breakfast.

Seating is limited. Tickets are $20 for adults, $5 for students, and are available at https://cslewissociety.ticketspice.com/coffee-danish-with-eric.

The breakfast is also sponsored by New Harvest Missions International (NHMI) and the C.S. Lewis Society.

NHMI’s vision is “to be salt and light for generations to come.” It provides experienced, indigenous staff to guide West African church leaders through the process of adaptation and growth.

“We are an indigenous mission with 100 percent native staff and workers. We aim to be a catalyst in establishing a generation of true disciples and worshipers,” organizers said.

The C.S. Lewis Society was organized by Princeton University students in 1975, as a guest-speaker forum for the campus community to hear Christian scholars articulate a biblical perspective on topics of wide public concern. After years of fruitful ministry, the Society was re-launched on the campus of Trinity College of Florida in 1988 as a fellowship of those committed to explaining and defending the Christian faith internationally. The college is at 2430 Welbilt Blvd. in Trinity.

“Our outreach has focused especially on university campuses and nations that are dominated by skeptical attitudes toward the core truths of Christianity,” said Dr. Tom Woodward, head of the society and director of Trinity College's Center for University Ministries.

The Society hosts a weekly radio/podcast show titled “The Universe Next Door.” It’s heard in five states, shares the good news of Christ and the evidence and reasons for faith with about 15,000 listeners per broadcast.

ABOUT: Both Eric Metaxas events in the Tampa Bay area are sponsored by The C. S. Lewis Society and New Harvest Missions International (NHMI).